Vertigo is quite common, with an incidence of around 5-10%, and up to 40% for 40+ year olds. Up to 70% of the population will suffer from some kind of vertigo during their lifetime.

There are many causes of dizziness, including injury or dysfunction of your neck, disorders of your inner ear, and your cerebellum.

The most common type of vertigo is called Benign Paroxysmal Positional Vertigo (BPPV). BPPV accounts for approximately 75% of all vertigo cases.

In your inner ears, there is a collection of tiny crystals, called otoliths or otoconia. They’re made of calcium, and they play a big role in our perception of movement and balance.

Inside our inner ear, lies the parts of the vestibular system which is made up of three semicircular canals. These canals are filled with a fluid which the crystals float in. There are tiny hair-like cells, called cilia which detect movement and transmit these signals about movement, position and balance to the brain. 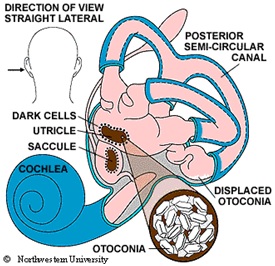 When our head moves, the crystals move with it, causing the viscous fluid in the canal to swirl about, which, in turn, causes the hair-like cilia to move. This movement is sensed by the nerves which is transmitted to the brain thus we perceive movement. This is what causes the dizzy or giddy feeling when we spin around quickly in a circle.In BPPV the crystal position can change and can affect the movement of fluid and cilia. This change then sends altered signals to the brain which is perceived as dizziness. This causes the sensation of movement, when in reality, there isn’t any.

Specific positioning techniques under the guidance of your physiotherapist are very successful at treating BPPV.

Treatment is up to 98% effective in resolving symptoms of BPPV. Often, BPPV can be resolved with one or two treatments, although there is a recurrence rate of approximately 45% in the first 30 weeks following treatment. This means you might need a few subsequent treatments.